Significant Recruitment, Retention and Reactivation Bill Introduced in the Senate

This bipartisan bill is a long-standing priority for the Congressional Sportsmen's Foundation (CSF) and will provide much needed flexibility to state agencies to use Pittman-Robertson funds for the recruitment, retention, and reactivation of hunters and recreational shooters. This legislation would not increase any taxes or existing user fees, but would allow state fish and wildlife agencies to use existing revenues in new and innovative ways. This legislation is identical to the House bill (H.R. 877) that was introduced earlier this year by bipartisan CSC House Leaders Representatives Austin Scott (GA), Mark Veasey (TX), Debbie Dingell (MI), and Richard Hudson (NC).

Hunters and recreational shooters contribute nearly $800 million annually through the American System of Conservation Funding (ASCF) from sporting-related excise taxes and license purchases under the Pittman-Robertson Fund to state agencies for various conservation efforts. As hunting license purchases have slowly declined over the past four decades, it is becoming increasingly important to provide flexibility to states to use Pittman-Robertson funds to develop and implement strategies to retain and reactivate existing and lapsed hunters and recreational shooters as well as to recruit the nation's next generation of sportsmen and women. 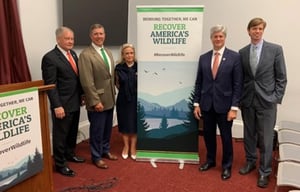 "The Congressional Sportsmen's Foundation would like to thank Senator Risch for reintroducing this important legislation. With a decline in hunting license purchases across the country, it is critically important to provide flexibility for state agencies to use Pittman-Robertson funds for the recruitment, retention, and reactivation of hunters and recreational shooters," said CSF President Jeff Crane. "This bipartisan legislation will help ensure America's sportsmen and women continue to serve as a crucial source of funding for the vast majority of state wildlife conservation efforts that benefit the American public as a whole."

"Hunting and shooting sports are woven into the fabric of Idaho's history with generations of sportsmen and women passing down hunting traditions from father to son, mother to daughter. This is a legacy we must uphold and protect," said Sen. Risch. "This legislation will make important updates to the Pittman-Robertson Fund to ensure future generations can carry on this treasured pastime of hunting and recreational shooting while conserving wildlife for outdoorsmen and women to enjoy and experience."

This legislation now awaits further action in the U.S. Senate.